Many people try vitamin E creams to fade scars. Others break open vitamin E capsules and rub them directly on the affected area in hopes of minimizing the appearance of the scar. While it is tempting to believe an inexpensive and widely touted remedy like vitamin E can help to fade away scars, no studies have shown the efficacy of vitamin E in fading scars. As a matter of fact, vitamin E can act as a skin irritant, and may cause contact dermatitis or even make the appearance of scars worse in some cases. Neither topical application nor supplementation of vitamin E have shown to be effective in fading scars.

What Does Fade Scars?

If vitamin E doesn't fade scars, is there something that does? Many people are bothered by the appearance of scars and want to help them fade away. While no treatment can completely remove a scar, there are some medical, dermatological and over the counter treatments that may help in minimizing the appearance of scars. Treatments are often fairly expensive. Some are invasive and often only recommended in cases of disfiguring scars. Some of the these treatments include:

Dermabrasion is the process of removing the upper layer of cells through a mechanical process performed by an esthetician or dermatologist. It is one of the least invasive forms of scar minimization. There is some success in minimizing the appearance of raised scars, although it doesn't work with sunken scars. 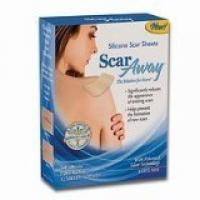 Dimethicone silicone gel comes on something known as "scar sheets," which usually have silicone on one side and fabric on the other. The sheets are placed over the scar and can, over time, fade the scars. Some brands of silicone scar sheets are BioDerm, Oleeva and ScarAway. Silicone scar sheets can be purchased from drugstores, and others are available with a doctors' prescription. Check with your dermatologist or pharmacist to see if a silicone gel scar sheet will work for you.

In the case of sunken scars, injecting collagen into the sunken region can raise the tissue so it is even with surrounding tissue. The effect of collagen injection is temporary, so injections need to be repeated. There is a risk of permanent flattening of the tissue and allergic reaction.

Laser resurfacing has been shown to have a positive effect on the appearance of scars. It is considered a surgical procedure that can be done on an outpatient basis by a dermatologist. Patients typically notice a change in the appearance of scars in six to ten weeks post-resurfacing. While medical and dermatological lasers today are quite safe, there is some risk of burning and some pain associated with the procedure and recovery.

While it does seem to be a wives' tale that vitamin E reduces the appearance of scars, there are new technologies that just may be effective. If you have a scar that bothers you, talk with your dermatologist about treatment options to minimize its appearance.