Calcium has many roles in the body including the brain where it facilitates nerve cell-to-cell signal transmission, among other functions. Calcium deposits form in the brain as part of normal physiology and aging, and frequently they are seen incidentally during brain imaging to evaluate other medical problems. Calcifications are also seen in other benign as well as pathologic situations specific to the brain, or in other generalized conditions of the body.

When calcium deposits in body tissues, the mineralization - as in bone - becomes visible on imaging studies, such as x-rays and CT or MRI scans. Radiologists often see calcifications in brain tissue, cerebral blood vessels, or brain coverings (the dura and meninges) on these studies and have to decide whether they are benign. Some of these calcified areas can be large and are referred to as "brain stones," as reviewed in a 2013 article in Insights into Imaging.

A recognizable pattern or location of cranial calcifications, preferably by CT scan, can help a radiologist narrow a list of possible causes that fit with the presenting clinical symptoms and signs.

Calcification of brain tissue increases with aging, as reviewed in a study reported in 2008 in the American Journal of Neuroradiology. The most common sites of calcium deposits in the brain as part of natural aging include the basal ganglia, the pineal gland, and the dura mater. These deposits are not associated with a disease process or symptoms.

Other Causes of Brain Calcifications 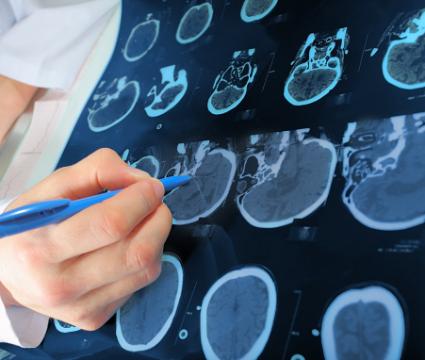 Most other causes of brain calcifications are due to benign conditions that cause no harm, while others are because of pathological conditions and may or may not cause neurologic symptoms, such as seizures or imbalance. It depends on the cause and location. These causes of cranial calcifications can be sorted in the following categories for convenience:

Calcifications can be seen in the brain and elsewhere in the body with physiologic disturbances of calcium metabolism. According to the National Center for Biotechnology Information (NCBI), disorders that interfere with calcium and phosphorous metabolism change calcium levels in the blood. This can cause excess calcium to be deposited in various parts of the body, including the brain and kidneys.

The level of calcium in the blood is tightly controlled via a complex interaction between:

Any problem with any part of this system can lead to calcium deposits in the brain and other body tissues. The most common cause of disturbance in calcium and phosphorous metabolism include:

Calcium salts frequently deposit in diseased and healing sites; therefore, many pathologic disorders in the brain can become calcified as part of the disease process. In addition, calcium can deposit in areas of the brain as part a systemic disease process associated with calcification. Brain and systemic pathologic processes include:

Some fetuses acquire diseases in the womb that cause brain disorders, affect brain development, and lead to calcium deposits in the disease process. Causes of congenital brain calcifications include:

Primary familial brain calcification (PFBC), formerly known as familial idiopathic calcification of the basal ganglia (ICBG) or Fahr's disease, is a rare condition of unknown cause. Calcified deposits are seen primarily in the basal ganglia and in other areas of the brain. The disease is associated with neurologic and psychiatric symptoms. These deposits may be seen in early life, but symptoms may not begin until a person reaches his/her thirties.

Calcium Supplements and the Brain

It is unlikely that eating a lot of calcium-rich foods will cause calcium deposits in the brain. However, taking excess calcium or vitamin D supplements higher than the daily recommended doses can increase blood calcium levels. According to the National Center of Biotechnology Information reference, this can lead to soft tissue calcifications, which would include the brain.

Treatment of brain calcium deposits depends on the cause and location, and whether there are any associated neurologic symptoms. Symptoms are not usually caused by the calcifications but by the underlying process.

Areas of deposits of calcium in the brain are common findings on brain imaging studies. Though there are many causes, brain calcifications are most often benign and not cause for concern. The location and pattern of the deposits and the clinical signs and symptoms will help determine a diagnosis.

Comments
© 2006-2021 LoveToKnow, Corp., except where otherwise noted. All Rights Reserved.
Causes for Calcium in the Brain