Ingesting too much vitamin D in supplements or fortified foods can cause bone pain, muscle aches, and other body symptoms. A loss of bone calcium causes the bone pain, and the resulting increase in blood calcium level and its effect on body tissues cause the other symptoms. With the current emphasis on the multiple roles of vitamin D and the risks of vitamin D deficiency, make sure you are not taking in more of the vitamin than recommended.

According to Advances in Experimental Medicine and Biology, vitamin D, along with calcium and phosphorous, is essential to normal bone formation and mineralization. A high vitamin D blood level leads to bone pain by causing increased resorption and remodeling of bone and calcium turnover. This can happen quickly from taking a massive doses of vitamin D, or slowly from prolonged ingestion of somewhat smaller doses. It depends on other individual health factors.

Loss of Bone Calcium and Pain

Bone remodeling is an ongoing dynamic process of breaking down (resorption) and releasing calcium, then rebuilding (mineralization) by reusing calcium. With high vitamin D levels, the process of resorption is greater than that of mineralization, and bone loses calcium to the blood circulation. This leeching of calcium causes bone aches and pains and in the extreme, it can lead to osteopenia and osteoporosis in adults and osteomalacia in children. The level of pain depends on how much your bones are affected. You may be at greater risk if you have kidney or liver problems or take a medicine, such as a diuretic or steroids. 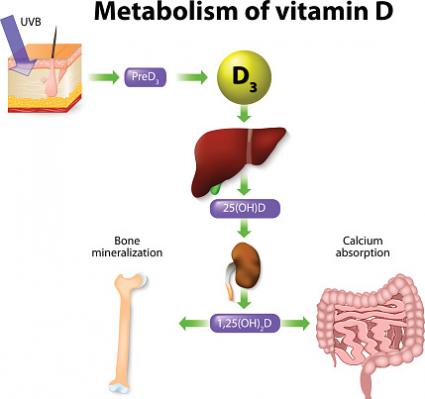 Vitamin D and calcium metabolism are closely linked, and one of vitamin D's main role is to help tightly maintain normal calcium blood level by regulating bone calcium stores. In addition to the contribution from the increased bone resorption, high vitamin D intake causes an increase in blood calcium levels by:

The resulting high calcium blood level (hypercalcemia) from the three activities explains the multiple other symptoms seen in other organ systems when too much vitamin D is consumed.

Vitamin D Levels That Lead to Bone Pain and Hypercalcemia

Based on a 2008 review in the American Journal of Clinical Nutrition, hypercalcemia is seen when vitamin D blood levels rise above 375 to 500 nanomoles per liter (nmol/L). Bone pain can begin to occur even at the lower end of excess vitamin D levels when the exposure is prolonged.

According to the National Center for Biotechnology Information, researchers consider a normal vitamin D blood serum level to be between 30 to 50 nmol/L and 250 nmol/L a safe upper limit of normal. Toxic symptoms of vitamin D excess, or hypervitaminosis D, occur most often when the vitamin D level is 750 nmol/L or higher.

Other Symptoms of Vitamin D Excess

In addition to bone pain, muscles aches, and muscle weakness, you may have some level of the other symptoms caused by the hypercalcemia of vitamin D excess. Early or mild symptoms include fatigue, nausea, vomiting, abdominal pain, thirst, and constipation, which may be passed off as other illnesses

The higher and more prolonged the vitamin D intake and the higher the calcium level, the more severe the symptoms. According to a MedlinePlus and a Mayo Clinic review, symptoms of high vitamin D and hypercalcemia, based on organ systems, include:

The worst symptoms are seen in cases of vitamin D toxicity or overdose. Over time, calcium deposits can occur in tissues throughout the body, including the brain, heart, and blood vessels.

Other Causes of Bone Pain

If you have generalized bone pain, take a look at your vitamin D and calcium intake; however, there are other causes to consider. These include other metabolic abnormalities or disease that increase your calcium level, including: 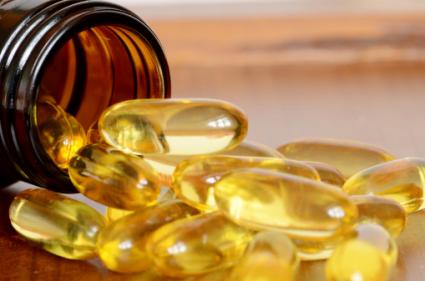 It is difficult, and likely impossible, to get too much vitamin D from regular food sources or from sun exposure, according to the National Institutes of Health (NIH) factsheet. Based on case reports, such as one in 1992 in the New England Journal of Medicine and another in 2001 in the same journal, high vitamin D ingestion or intoxication usually occurs from:

Because vitamin D is fat soluble, it is stored in fat and released when needed. Excess amounts from these sources can build up over time and, although uncommon, can lead to toxic symptoms.

Reduce Your Risk of Taking Too Much Vitamin D

To reduce your chance of getting too much vitamin D, don't be tempted take more than the recommended daily allowance (RDA) for the vitamin. According to the National Institutes of Health (NIH) factsheet referenced above, the RDAs for men and women are:

For comparison, these are the vitamin D levels in selected foods using data from the United States Department of Agriculture National Nutrient Database:

Add up all your sources of vitamin D to keep on top of your daily intake. There is no need to take a supplement if you are getting enough from your diet unless your doctor advises it for health benefits.

Experts suggest toxic symptoms are more likely with a daily intake of vitamin D between 10,000 to 40,000 IU; however, prolonged intake below 10,000 IU may cause symptoms, according to the NIH factsheet. The experts advise that 4,000 IU of vitamin D a day is the "upper tolerable limit" but to avoid toxicity, don't take more than 1,000 IU daily. To avoid the risk of high doses of vitamin D:

Check With Your Doctor

If you are taking high doses of vitamin D from supplements or other sources and develop bone pain, especially if associated with symptoms of high calcium, speak with your doctor. A simple blood test to measure your blood serum vitamin D and calcium levels will provide valuable information.

0
Comments
© 2006-2020 LoveToKnow, Corp., except where otherwise noted. All Rights Reserved.
Resources, Advice & Tips for Covid-19
Read More
Can Too Much Vitamin D Cause Bone Pain?